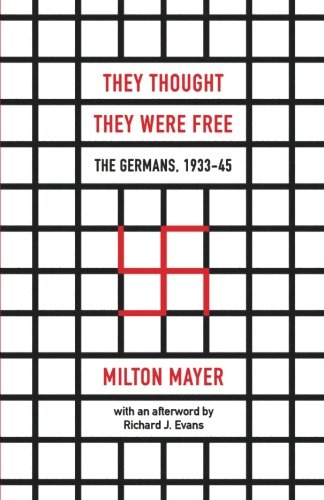 “When this book was first published it received some attention from the critics but none at all from the public. Nazism was finished in the bunker in Berlin and its death warrant signed on the bench at Nuremberg.”

That’s Milton Mayer, writing in a foreword to the 1966 edition of They Thought They Were Free. He’s right about the critics: the book was a finalist for the National Book Award in 1956. General readers may have been slower to take notice, but over time they did—what we’ve seen over decades is that any time people, across the political spectrum, start to feel that freedom is threatened, the book experiences a ripple of word-of-mouth interest. And that interest has never been more prominent or potent than what we’ve seen in the past year.

They Thought They Were Free is an eloquent and provocative examination of the development of fascism in Germany. Mayer’s book is a study of ten Germans and their lives from 1933-45, based on interviews he conducted after the war when he lived in Germany. Mayer had a position as a research professor at the University of Frankfurt and lived in a nearby small Hessian town which he disguised with the name “Kronenberg.” “These ten men were not men of distinction,” Mayer noted, but they had been members of the Nazi Party; Mayer wanted to discover what had made them Nazis. His discussions with them of Nazism, the rise of the Reich, and mass complicity with evil became the backbone of this book, an indictment of the ordinary German that is all the more powerful for its refusal to let the rest of us pretend that our moment, our society, our country are fundamentally immune.

A new foreword to this edition by eminent historian of the Reich Richard J. Evans puts the book in historical and contemporary context. We live in an age of fervid politics and hyperbolic rhetoric. They Thought They Were Free cuts through that, revealing instead the slow, quiet accretions of change, complicity, and abdication of moral authority that quietly mark the rise of evil.