Current estimates suggest that 1 million to 2 million American’s older than age 65 have been abused, neglected, or exploited by someone with whom they have placed their trust. Although standards may vary across cultures regarding the level of respect, attention, and support provided to the elderly, all cultures recognize the increased vulnerability that occurs with aging. Elder neglect occurs when the increased needs of the elderly are unmet by a designated caretaker. The specific legal definition of “elder neglect” varies from state to state (Table 1). However, all generally define it as the failure of an individual to provide the basic necessities needed for mental and physical health. This includes a failure to provide adequate food, water, clean clothing, medical care, or a safe living environment.  Neglect  can  occur  by  family  members  with legal responsibilities to the elder, or by agencies providing caretaker services to the elder (e.g., in-home nursing, residential retirement centers).

The American Medical Association (1996) defined neglect as the failure to provide goods and services necessary for functioning or to avoid harm. These goods and services include personal care, medications and appropriate medical attention, adequate nutrition, and a safe environment. Neglect has been further defined according to the intent of the abuser. Passive elder neglect often occurs from an omission or failure to act and is often considered unintentional, due to a lack of information or resources. In contrast, active neglect is considered to be an intentional, malicious withholding of adequate goods and services. While the medical definition may distinguish between passive and active neglect, it is important to note that, in most jurisdictions, the legal consequences are the same for neglect by act or omission.

Elder neglect occurs between a vulnerable elder and an individual or organization in a caregiving relationship.  The  relationship  can  be  through  kinship, such as an adult child caretaker, or contractual, such as an employed caretaker. State law determines the age at which neglect of an adult is considered “elder neglect,” usually at age 60 to 65. Conceptually, elder neglect cannot occur if the elder has the capacity for self-care and self-protection. In some states, the legal definition of capacity is the benchmark. Another important distinction is that of self-neglect; the failure of the elder to meet their own basic needs or protect themselves. Self-neglect often occurs in the presence of some form of dementia. The differentiation between self-neglect and neglect concerns whether or not a caretaking relationship has been established. While several federally funded agencies research and provide services to victims of elder abuse and neglect, the legal definition of elder neglect varies and is provided by state law. A common misconception is that adult children are more often the perpetrators of elder abuse. In fact, spouses are more likely to commit elder abuse than adult children. This phenomenon has been referred to as “domestic violence grown old,” given that the abuse often begins earlier in life, as domestic abuse, and continues into old age. Several abuser characteristics have also been identified. Studies have found that caretakers with mental illnesses, in particular depression, are more likely to commit elder abuse. Elder abusers also tend to score higher on measures of hostility and also tend to be financially dependent on the victim of elder abuse. While alcohol abuse is very common among elder abusers in general, those who commit elder neglect have not been found to have an increased rate of alcohol abuse.

Adult Protective Services (APS) reports that the majority of elder abuse victims are women. However, given that there are more female elders in the population, it is difficult to determine if gender is a true risk factor. Several studies have actually found more male elders abused than females.

There has been little research investigating the consequences of elder neglect. Often, research reports will assess the consequences of elder mistreatment as a whole, rather than differentiating between the effects of abuse and neglect. Additionally, investigating the consequences of elder abuse in general is difficult given the natural decline in health and increase in disease seen during old age. An increased mortality rate is seen in those reported to adult protective services as possible abuse cases. However, this increased mortality rate is not seen until several years post-report. In 2000, the Elder Justice Roundtable Report described our current medical knowledge of the consequences of elder neglect as approximately three decades behind our knowledge of child neglect. It has been suggested that this may be the result of the current medical forensics system in place. If a child dies of unknown causes, the death is investigated fully. However, an unexplained death in the elderly is rarely put to the same scrutiny.

Medical consequences of elder neglect can manifest in many different ways. Multiple decubiti (“bedsores”) are commonly seen in cases of neglect. Decubiti occur from prolonged pressure to certain areas on the body, most commonly from staying in the same position for longer than 2 hours. Malnutrition and dehydration is seen in cases where food and water are withheld. Loss of limb or severe infections can occur when there is a neglect to change bandages or care for wounds. Additionally, a variety of illnesses, and even death, can occur when medications are withheld or given infrequently (e.g., insulin for diabetics). In addition to a marker for physical abuse, burns are also an indicator of potential neglect. A 1998 study at the Fort Sam Houston Burn Unit found that 36% of burn patients over the age of 60 were victims of neglect.

As for psychological consequences, increased rates of depression have been documented in victims of elder neglect, as well as all other forms of elder abuse. Increased rates of alcohol abuse are also seen in neglected elders. Additionally, dementia and psychosis have been shown to be related to elder neglect. However, this is theorized to be more a risk factor for neglect rather than a consequence.

The first step to intervention is the identification of those elders being abused or neglected. The reporting of suspected elder abuse is required by law for many professions. Several states have mandatory reporting laws for any individual, regardless of profession, if elder  abuse  is  suspected.  Suspected  cases  of  elder abuse should be reported to your local APS agencies. However, it is important to note that some states require that suspected abuse be filed at both APS and local law enforcement agencies.

Intervention can occur from one or several different agencies, such as APS, criminal justice, and the health care system. APS investigates reports of elder abuse and neglect and determines what actions are necessary. Most states require an in-person assessment within 24 hours of a report being made. If abuse or neglect is determined to have occurred, APS is responsible for developing a service plan aimed at removing the threat from the elder and ensuring his or her continued safety. Law enforcement officers may be the first to respond to an initial report of abuse and will notify APS if they believe abuse or neglect has occurred. In addition, criminal action may be taken against the abusive caretaker.

Elder neglect continuing over an extended period of time often results in emergency room visits, the most common point of intervention for the health care system. The difficulty lies in differentiating between elders whose health is failing due to old age and those who are victims of neglect. Specialty health fields, such as forensic nursing, have emerged in response to this need. In sum, it is important to note that the elderly provide important contributions to both the family and community and that aging can occur with both dignity and pride if caretakers are responsive to the increased needs required in old age. 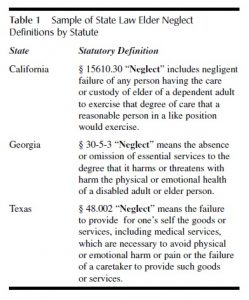