There  are  several  prevailing  models  that  connect psychological  factors  and  sport  injury,  each  with slightly  different  perspective  on  relevant  biological,  psychological,  or  social  factors.  Moreover, prevailing  models  have  typically  focused  either on  incorporating  psychosocial  factors  in  predicting  and  preventing  sport  injury  incidence  or upon  identifying  psychosocial  factors  associated with injury recovery and rehabilitation outcomes. Extensive reviews of these models have been written by Jean Williams and Mark Andersen, Britton Brewer,  and  Diane  Wiese-Bjornstal.  This  entry provides  an  overview  of  the  mediating  biological pathways  and  physiological  mechanisms  linking psychosocial  stress  to  athletic  injury  and,  where appropriate, other adverse health consequences.

Both  historical  and  recent  conceptualizations of  psychosocial  stress  posit  wide-ranging  biological  effects  on  health.  In  this  regard,  Frank  Perna and   colleagues   have   argued   that   emotional, behavioral,  and  physiological  aspects  of  stress response  must  be  considered  together  with  attention disruption to fully capture potential pathways mediating  the  relationship  between  psychosocial stress and adverse health including athletic injury. Additionally,   since   the   physical   demands   of training  volume  and  intense  exercise  required  in competitive  athletics  are  known  to  have  adverse temporal effects on immune, neuroendocrine, and skeletal muscle repair response, a primary tenet of a biopsychosocial model of injury is that psychosocial  distress  may  act  synergistically  with  high intensity,  high-volume  sports  training  to  widen  a window of susceptibility to illness or injury.

The  biopsychosocial  model  of  stress  athletic injury  and  health  (BMSAIH)  is  offered  below  to illustrate  pathways  between  stress  demands  and athlete health (see Figure 1). The BMSAIH expands the Andersen and Williams model of psychosocial stress  and  athletic  injury  in  three  essential  ways: (1)  It  clarifies  mediating  physiological  pathways between  athletes’  stress  response  and  adverse health outcomes (e.g., sport injury); (2) it considers  other  health  outcomes  and  behavioral  factors that  impact  sport  participation  as  well  as  injury; and (3) it integrates the impact of exercise training upon athletes’ health.

The  BMSAIH  should  be  considered  an  independent  extension  of  Andersen  and  Williams’s classic  model  of  stress  and  athletic  injury,  which is  reviewed  elsewhere  (see  also  the  entry  “Injury, Psychological  Susceptibility  to”).  Similar  to  other generic  models  of  stress  and  adverse  health  consequences, the Andersen and Williams model posited  that  a  stress  response  mediated  the  effect  of stressor(s)  on  the  health  outcome,  athletic  injury, with the stress response being composed of physiological  and  cognitive  features  (attentional  perturbations such as peripheral narrowing) thought to predispose an athlete to injury. While the stress response was conceptualized as being both physiological and cognitive in nature, the original model and the preponderance of studies have principally only  researched  cognitive  features  (disturbances in attention and recognition of sport-related cues) thought to predispose an athlete to injury. Yet, the relationship  between  psychosocial  stress  and  athletic  injury  appears  stronger  for  overuse  injuries that are likely less dependent on cognitive processing  and  more  likely  related  to  physiological  processes  affecting  exercise  training  adaptation  and recovery. The stress-injury model also proposed a number of factors, such as personality, history of stress,  and  coping  resources,  that  may  moderate a  stress  response,  but  there  was  less  clarity  and exposition  of  mediating  pathways,  particularly those related to stress physiology, by which stress response may increase risk of injury. Negative  life  stress  and  attendant  emotional  distress,  through  autonomic  nervous  system  (ANS) response  pathways,  is  thought  to  exacerbate  the adverse  effects  of  prolonged  high-intensity  and high-volume  exercise.  Specifically,  psychological stress  causes  activation  of  the  ANS  yielding  the release  of  catecholamines  like  epinephrine,  norepinephrine,  neuropeptides,  and  glucocorticoids (cortisol). Because target organs, such as heart, vasculature, muscle, and immune tissue, contain efferent  nerves  and  have  receptors  for  catecholamine and glucocorticoids, ANS activation affects target organs either by direct innervation of the parasympathetic and sympathetic nervous systems (PNS and SNS, respectively) or by hormonal action via activation  of  the  hypothalamic-pituitary-adrenal-cortex (HPAC)  and  cortisol  release.  Cognitive  features related to a person’s appraisal of the severity of a stressor and the capacity to cope with a stressor is known to exacerbate or prolong emotional reactivity and concomitant physiological response. Direct innervation, particularly by the SNS and catecholamine  release,  and  hormonal  action  (e.g.,  cortisol release) thus provide the mechanistic links used to explain  how  the  brain  and  associated  cognitive– affective processes attendant to psychological stress may influence stress physiology and other physical systems,  particularly  those  of  relevance  to  athlete health like immune and skeletal muscle.

Because  the  ANS  may  operate  either  through direct innervation or hormonal action, there are a variety of possible neuroendocrine and hormonal patterns (differential responses to stress) that have evolved  to  characterize  the  stress  response  since Hans  Selye  first  proposed  the  general  adaptation syndrome,  an  undifferentiated  response  to  stress. Moreover, specific ANS patterns are known to be influenced  by  features  of  cognitive  appraisal  particularly being dependent if an individual views a life event as a negative stressor or as a challenge. Thus,  it  is  recognized  that  ANS  activation  in response  to  stress  is  not  always  deleterious,  and indeed, is necessary. For example, it has long been known  that  ANS  activation,  particularly  of  the SNS,  is  associated  with  performance  of  physical and cognitive tasks. Similarly, HPAC activity and cortisol release are known to potentiate the actions of epinephrine in the completion of physical tasks and, when not prolonged, cortisol initiates a cascade  leading  to  anabolic  activity  necessary  for muscle repair following intense exercise.

A  thorough  discussion  of  possible  hormonal response  patterns  in  response  to  stress  is  beyond the scope of this entry but can be found in work by  Trent  Petrie  and  Frank  Perna.  In  short,  three hormonal patterns are thought to result in adverse health  effects.  These  are  thought  to  occur  when individuals  (a)  experience  frequent  negative  life stress  and  concomitant  frequent  activation  of  the SNS  and  HPAC  pathways  involving  principally the release of epinephrine and cortisol to a lesser extent, (b) are hypersensitive to stressors and have an  atypically  high  SNS  and  epinephrine  response out  of  proportion  to  the  magnitude  of  a  stressor, and (c) experience chronic stressors and emotional distress with a prolonged activation of the HPAC and heightened cortisol release. The latter scenario involving  measurement  of  enduring  effects  of negative life events, either in isolation or with their association with cortisol response, has received the most attention.

In  addition  to  stress  mechanisms  described above,  HPAC  activation  and  possible  concomitant  behavioral  disruptions  (e.g.,  sleep  disturbance)  resulting  from  heightened  negative  affect may  act  in  synergy  with  the  demands  of  heavy exercise  to  increase  risk  of  illness  and  injury.  For example,  poor  sleep  has  been  associated  with prolonged  elevation  in  evening  cortisol,  immune decrements, and lessened growth hormone release, all  of  which  may  inhibit  muscle  repair  following acute  exercise.  Negative  emotion-linked  increases in  stress  hormones  (cortisol)  and  behavioral  perturbation  may  thus  widen  or  prolong  a  window of  susceptibility  for  illness  and  injury  that  is  created  by  high-intensity  and  high-volume  training. That is, psychological distress may impair muscle growth  and  repair  processes  by  prolonging  the presence  of  post-exercise  catabolic  hormones  like cortisol that also impair immunity and inhibit the secretion  and  action  of  anabolic  factors,  such  as growth  hormone  and  insulin-like  growth  factors. Due  to  cortisol’s  immunosuppressive  and  muscle catabolic  effects,  prolonged  training-induced  cortisol elevation may create favorable conditions for viral infection, athletic injury, and exercise training maladaptation.

Similarly,  elevated  negative  mood  state,  particularly  fatigue  and  depression,  has  been  used to  identify  overtrained  athletes.  Depressed  mood has  also  been  related  to  impaired  immune  function,  and  this  effect  may  be  mediated  by  cortisol elevation.  Although  the  physiological  strain  of exercise training is largely responsible for cortisol and  mood  fluctuation,  studies  suggest  that  psychological life-event stress (LES) may also modulate  cortisol  and  health  parameters  in  athletes. For example, elite athletes with high LES, in comparison  to  low  LES  athletes,  have  been  reported to  experience  prolonged  post-exercise  cortisol elevation, which was prospectively correlated with a  greater  frequency  of  physical  symptom,  such as  muscle  pain,  back  tightness,  or  flu-like  symptoms.  Elevated  LES  has  also  been  prospectively related  to  increased  risk  of  athletic  injury  and viral infection (e.g., common cold). In essence, the BMSAIH  suggests  that  health  effects  of  psychosocial stress would be most pronounced when an athlete was either in or just removed from a high-volume  or  high-intensity  period  of  training,  and that  sport  training  cycle  should  be  considered  to optimally  measure  the  association  between  psychosocial  stress  and  athletic  injury  and  adverse health.

Taken  together,  the  literature  indicates  that independent  from  intensity  and  volume  of  sports training,  psychological  stress  likely  contributes to  athletes’  neuroendocrine  and  immune  activity, which may be a mediating pathway linking stress to increased risk for adverse health effects including athletic injury. However, the effects of psychosocial  stress  on  health  may  be  more  pronounced during  periods  of  high-volume  and  intense  exercise  training.  Because  athletes  must  train  at  high volumes and intensities to make the physiological adaptations  necessary  for  competitive  success, commercially  available  exercise  recovery  monitoring  systems  have  appeared  on  the  competitive sports  milieu  and  have  been  extensively  reviewed by   Michael   Kellman.   These   systems   include the assessment of physical, emotional, and social– contextual   stress   responses,   as   athletes   must maintain  a  delicate  balance  between  demands and  recovery  to  stay  healthy,  avoid  injury,  and ultimately  perform  optimally.  However,  athletes’ efforts  to  balance  training  and  recovery  occur within  a  sport  culture  that  often  undervalues the  importance  of  psychosocial  factors,  and  perhaps  also  recovery.  As  a  result,  the  culture  of competitive sport reinforces an imbalance between psychosocial and sport training factors, which ultimately may affect training adaptation, injury, and overall health. Sport psychology personnel trained to  assist  athletes  with  life-event,  precompetitive, and  post-injury  stress  are  also  widely  available. However, the efficacy of psychosocial intervention to  reduce  injury  risk,  facilitate  exercise-training adaptation,  and  enhance  athlete  health  has  been less extensively investigated.

In the athletic domain, cognitive–behavioral stress management  (CBSM)  intervention  in  the  form of  psychological  skills  training  is  well  known  to reduce  competitive  anxiety  and  enhance  athletic  performance.  CBSM  has  also  been  shown to  reduce  pain  and  speed  recovery  and  return  to play following arthroscopic surgery among injured recreational  athletes.  In  a  handful  of  randomized controlled  trials,  CBSM  improved  exercise  training  adaptation  in  the  form  of  lessened  fatigue, depressed mood, and cortisol curve during a high-volume training period among competitive rowers. Further, CBSM intervention has also been shown to  reduce  actual  incidence  of  athletic  injury  and illness. One of these trials conducted by Perna and colleagues specifically tested if intervention effects on  cortisol  and  affect  mediated  health  outcomes. Findings  demonstrated  that  rowers  in  a  CBSM condition  had  significantly  fewer  days  injured or  ill  and  half  the  number  of  health  and  training center  visits  compared  with  controls.  Mediation analyses  indicated  that  modulation  of  affect  and cortisol accounted for approximately one half and one fifth, respectively, of the intervention effect on days injured or ill. Though limited, the extant literature provides compelling support for the potential value of intervention to lessen risk of athletic injury  and  illness  and  to  facilitate  sports-training adaptation. Future research should seek to further elucidate the physiological pathways underpinning the  psychosocial  stress  and  health  relationship, and explore biopsychosocial mechanisms that may be  responsible  for  intervention  effects  on  athlete health. 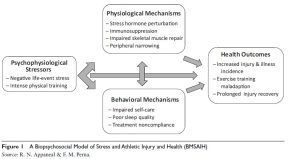