The lens model originated in Egon Brunswik’s concept of probabilistic functionalism, which is primarily a theory of perception. Brunswik was convinced that the methods of psychological research during the first half of the 20th century were wrongheaded, especially with regard to the “rule of one variable,” which many held was the only way to do psychological science. He believed that an essential characteristic of behavior is vicarious functioning—that is, the achievement of organismic goals, either perceptual or instrumental, through a variety of means. The rule of one variable prevents the organism from exercising this fundamental characteristic, thus precluding valid knowledge of behavior.

The introduction of orthogonal, multivariate research designs such as ANOVA (analysis of variance) did not alleviate the problem. Brunswik argued that in order for a scientist to generalize to some population of situations, those situations must be sampled as carefully as people are sampled and must be similar to the situations for which the generalization is intended. Situations in the world are not orthogonally designed. Hence, ANOVA designs, Brunswik argued, are laboratory artifacts that do not permit generalizing beyond the laboratory. His solution was representative design, a solution embodied in the lens model.

The lens model was originally conceived as a perceptual analogy in which the distal stimulus is perceived by a person in terms of multiple cues that are imperfectly correlated with each other, each providing overlapping (i.e., correlated) information about the stimulus to be perceived. The distal stimulus is portrayed as having rays emanating from it that represent the cues. The lens collects the information and refocuses it so that the perceptual system probabilistically “achieves” the correct percept.

Kenneth Hammond brought Brunswik into mainstream psychology by applying his ideas to judgment. In a judgment context, the lens model is best described in terms of an approach called judgment analysis, which requires a substantial number of multi-attribute situations about which a person makes judgments. The purpose of judgment analysis is to understand the relationships between (a) the environment and the attributes, commonly called cues; (b) a person’s cognitive system and the cues; and (c) the environment and judgment systems.

Consider a highly idealized example. Imagine a company that is interested in the validity of the hiring decisions of its personnel department. Fortuitously for the industrial/organizational (I/O) psychologist, for legal reasons, the last 100 applicants have all been hired irrespective of the personnel director’s ratings, which were based on five factors, duly recorded. Hence, the judgment data are available for analysis. The company has a criterion for success, and the five factors are conceptualized as cues to both judgment and success. Regression analysis can be used to assess the contribution of the cues to successful prediction and the relationship of the cues to success on the job. The lens model, depicted in Figure 1, provides a rich tool for understanding. Modeling the Environment and the Judge

The two sides of the lens are described in the same conceptual terms, instantiated by multiple regression. Policy capturing is performed on the data of the personnel director, or in lens model parlance, the judge. The multiple correlation, Rs, reflects the degree to which the person’s judgments are predictable, assuming a linear, additive model. Ideally (barring the ever-present unreliability of judgment), it should be 1.0 unless the judge is validly using nonlinearities of function form, nonadditivities in the integration rule, or valid cues that are not in the equation (such as knowing that an otherwise poor applicant is the CEO’s son). The variable R is determined by how well the cues predict the environment and how well the model has been specified. The cue-utilization coefficients (ri) and ecological validities (re) are zero-order correlations reflecting the importance of the cues to the judge and to success on the job, respectively.

Relationship between the Judge and the Environment

The bottom line is whether the personnel manager can make valid predictions of job success. What I/O psychologists know as validity is called, in the jargon of the lens model, achievement, and it is reflected in the statistic ra, the correlation between the 100 judgments and 100 criterion values. The degree to which r e and ris are similar determines G, the zero-order correlation between the predicted values of the two linear models, which can be interpreted as the validity of the person’s knowledge of the linear additive components of the environment. The C index, the zero-order correlation between the residuals from the two models, reflects the extent to which the unmodeled aspects of the person’s knowledge matches unmodeled aspects of the environmental side of the lens.

Achievement is influenced by all of the foregoing variables. It is represented by the truly elegant formulation known as the lens model equation, or LME:

When it is applied to appropriate problems, lens model analysis provides remarkable insight (which may be limited by modeling assumptions) into the interrelations between the person and the environment. The foregoing model has been framed in terms of an individual’s judgments, turning the usual sampling asymmetry on its head—we have one subject and many situations! If we wished to generalize across subjects, then we would sample subjects as well as situations, perform idiographic statistical analyses on each subject, then nomothetically aggregate the idiographic indexes.

Applications to industrial and organizational psychology abound. Whenever tasks call for one or more people to make judgments and criterion data are available, the lens model and LME are useful tools for discovery. Such tasks include performance assessment, employment interviewing, investment decisions, evaluation of discrimination charges, or assessment of the desirability of employment contracts. In other applications, the two sides of the lens may be two different people, and the LME could be used to explore similarities, differences, and conflicts. The LME indexes can also be used in cognitive feedback studies, wherein criterion weights can be fed back to subjects, who can then use the information to modify their judgment weights. 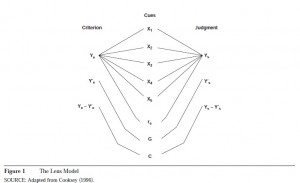