The general linear model, which subsumes both regression and ANOVA, assumes that errors are independent and normally distributed, with a mean of zero and a constant variance. Yet when the data are nested—for example, when the behaviors and attitudes of individuals within a team are affected by teammates—this assumption is violated. This is known as nonindependence, and its major consequence is that standard errors are smaller than they should be, which, in turn, contributes to inflated Type I errors. There are other, more subtle effects of non-independence that can cause problems with estimation of effect size and statistical significance; the References: section contains links for more details.

Nonindependence is most frequently documented by the intraclass correlation coefficient. When non-independence exists, the use of HLM becomes problematic; however, we now have the tools to more directly model the data in such situations.

A Nontechnical Introduction to HLM Thus, HLM offers the ability to link predictors at multiple levels of analysis with a dependent variable at a lower level of analysis. In the following section, some examples of research questions are provided in which HLM is most appropriate and necessary.

Hierarchical linear modeling is not necessary or even appropriate for all research questions. As reviewers and readers of the literature, we believe it is sometimes overused. In this section, examples illustrate HLM when it is most appropriate. For the sake of brevity, two major categories of applications of HLM will be considered, as well as the substantial research questions that can be addressed.

The first type of application supports a mixed-determinants model. This is the model described in Figure 1, which illustrates situations in which the dependent variable or criterion is at the lowest level of analysis and the independent variables or predictors are at the same or higher levels. In this case, the higher-level variable explains between-group and between-organization variance, and the lower-level variable explains within-group and within-organization variance. With regard to these models, researchers have identified four primary research questions that can be answered by HLM: (a) Does the unit in which individuals work make a difference? (b) What is the impact of individual differences across units? (c) Are individuals influenced by characteristics of the unit? and (d) Do unit properties modify individual-level relationships?

Although the origins of HLM can be traced back to decades of educational research, its applications in industrial/organizational psychology and organizational behavior have just begun to appear. Yet the timing could not be better: We now fully realize that many organizational phenomena are inherently nested and hierarchical. Hierarchical linear modeling has already been applied to such diverse topics as modeling the interaction between the individual and situation, understanding the dynamic nature of performance criteria, and illustrating the moderating effects of leadership climate, to name just a few examples. This technique is not a solution for all such questions; rather, it is most useful for questions in which the predictors exist at multiple levels and the criterion exists at the lowest level of analysis (this is true in both mixed-determinants models and growth models). These questions are frequently of great interest to organizational scholars. Therefore, HLM will likely continue to grow in application and help us to test our multilevel theories of organizational behavior. 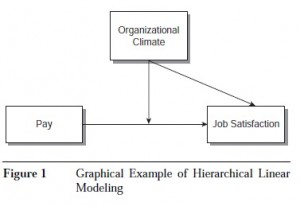