The least preferred coworker (LPC) theory, developed by Fred E. Fiedler, has been at the center of controversy almost since its inception. Called the contingency theory or the contingency model of leadership by Fiedler and his associates, the debate over its scientific validity and practical usefulness has sometimes been quite spirited. However, the rate of published theoretical and empirical research on LPC theory has slowed to a trickle as the field has shifted its focus to theories of transformational and charismatic leadership and as Fiedler and his colleagues have turned to work on cognitive resource theory, a derivative of LPC theory.

The LPC theory refers to the central variable of the model, a measure of the esteem in which the leader holds his or her least preferred coworker. The leader of each work group included in a study completes an LPC questionnaire to measure the leader’s leadership style and orientation. The leader is asked to think about all of the people with whom he or she has worked and to select one person who was the most difficult to work with—the least preferred coworker.

Next, the leader is asked to describe this person by placing an X in the appropriate location on a series of bipolar rating items, such as the sample shown below.

Most of the rating items involve interpersonal aspects that are not directly related to job performance (e.g., warm-cold), but some are work related (e.g., cooperative-uncooperative). The leader’s overall score on the LPC questionnaire is used to classify the leader as more concerned with work performance (leaders with low LPC scores) or more concerned with interpersonal relationships (leaders with high LPC scores). The LPC measure has been the subject of considerable scientific debate; some scholars have defended the measure and its interpretation, whereas others have attacked it (for a review of this literature, see Ayman, 2002).

The second variable in the model, situational control, reflects the leader’s perception of his or her ability to influence the work group toward achieving its goals. This variable is measured by assessing three components of situational control from the leader’s viewpoint. The first component is leader-member relations, the degree to which group members have positive social relationships with other group members and with the leader (the better the leader-member relations, the more the leader is able to influence the group toward high levels of task performance). The second component is task structure, which reflects the leader’s ability to control task accomplishment through his or her use of knowledge and expertise. Finally, the last component is leader position power, a measure of the leader’s ability to control his or her work group through the use of formal authority, rewards, and punishments (the higher or stronger the task structure and position power, the more the leader can influence the group toward task accomplishment).

These three elements are combined to obtain an overall measure of situational control by weighting leader-member relations as most important, task structure as the next most influential component, and position power as least important (the actual weights used are 4, 2, and 1, respectively). This combination process produces eight distinct situations, called octants, which differ according to the ability of leaders to exert influence or control over their work groups: According to the model and research conducted to date, low-LPC leaders have higher-performing work groups in the conditions of strong situational control (octants 1, 2, and 3) and in the condition of weak sit-uational control (octant 8). High-LPC leaders, on the other hand, have higher-performing work groups in situations of moderate favorability (octants 4, 5, 6, and sometimes 7). Whether these research findings are trustworthy and why findings have conformed to this pattern have been argued for decades. However, the work of Peters, Hartke, and Pohlmann (1985), Schriesheim, Tepper, and Tetrault (1994), and Strube and Garcia (1981) indicates that the substantial weight of the accumulated evidence has been largely positive, and the basic structure of the model’s proposed relationships seems generally well supported. This naturally raises the question, what does the model tell us we should do to enhance our leadership effectiveness or the leadership effectiveness of others?

Practical Implications of the LPC Model

Many books and articles have been written about the implications of the LPC model for leadership practice; probably the most useful for readers is Fiedler and Chemers’s Improving Leadership Effectiveness: The Leader Match Concept (1984).

According to Fiedler and his colleagues, a leader’s LPC score is akin to a basic aspect of his or her personality (e.g., assertiveness), and as such, it should be relatively stable and difficult to change over the short run. Because the performance of the leader’s work group is dictated by the match between the leader’s LPC score and the degree of control that the situation affords the leader, leadership effectiveness is most easily enhanced by changing the situation rather than by trying to alter the leader’s style.

This idea, called leadermatch, suggests that in order to improve a leader’s effectiveness (measured by his or her group’s performance), leaders should be relocated to situations that better match their LPC scores, or leaders’ current situations should be modified to better match their LPC scores (“good” matches occur when low-LPC leaders are situated in octants 1, 2, 3, or 8 and when high-LPC leaders are situated in octants 4, 5, 6, and 7). Fiedler and Chemers offer suggestions about how changes in situational favorability may be effected in real organizations; readers who are interested in implementing the LPC model’s approach are encouraged to read their work in detail. Arguments against using the leader match approach, presented by Schriesheim and Hosking (1978), should be considered as well. 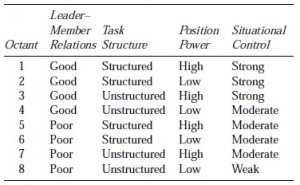